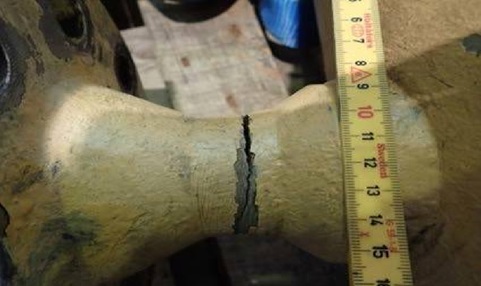 Having control over vibration might seem like a daunting task. On one side there are many sources to vibration, ie. pulsation, flow, external forces, machinery. On the other hand, there are many mechanical structures that can be put into motion, ie. internal components, pipes, main structure, valves.

When you know that Vibration = Force * Structural amplification – How is it possible to focus the effort when there are so many types of forces and mechanical structures?

You could of course spread accelerometers all over the structures you find and hope that the high density will catch most vibration occuring. Another way is to have personnel walking around all day, every day, trying to observe where vibration is occuring by looking, listening, feeling and measuring with portable vibration measurement equipment.

A smarter way is to figure out where the vibration is mostly occuring, high probability of failure, and combining this information with where the consequences of failures are the highest, the highest impact areas.

A recent trend in the oil and gas industry is that the budgets for maintenance are cut due to the low oil prices. To further improve profit the industry is trying to reuse old process facilities for expanded production. There is also a high focus on cutting weight, and modern pipes are typically thin walled stainless steel to fullfill this need. On top of this we see that the flow rates are being greatly increased to produce the same amount of volumes
when the reservoir pressures are low.

This combination of potentially riskful factors are being adressed in Guidelines for the avoidance of vibration induced fatigue failure in process pipework.” This guideline put special focus on small bore connections (SBC), that are typical candidates for fatigue failure due to vibration, a failure mechanism that has resulted in at least two major gas leaks in the norwegian
oil and gas industry in the latest years.

The German parallel to some of the tools found in the AVIFF guideline is the VDI 3842 standard for “Vibrations in piping systems” / “Schwingungen in Rohrleitungssystemen”. Both AVIFF and VDI 3842 have basic vibration level assessment with the use of simple equipment. The following calculation is can be done on site with portable vibration measurement equipment to get quick answers in accordance to the standards. It is no replacement for more thorough vibration assessments, such as DNV GL recommended practices (RP) DNVGL-RP-C203 “Fatigue design of offshore steel structures”, but it makes it possible to make a rough evaluation of the probability of failure at site with limited equipment. Both AVIFF and VDI 3842 are known to be concervative in relation to fatigue, so it should be a good starting point.

The results are calculated from T7 of the “Guidelines for the Avoidance of Vibration Induced Fatigue Failure in Process Pipework”, Energy Institute 2008.

FFT analyser setup is as follows:

We break down the problem, make it understandable, and provide targeted and cost-efficient solutions.